Getting Control of the Uncontrollable in Crew Productivity and Costs

Every airline is in the business of:

Getting in the way of the perfect outcome from a good plan are the unscheduled variables that occur such as:

All of the above agents of disruption are accepted in the industry as being pretty much ‘uncontrollable’ events that necessitate effective reactionary management to minimise threats to the schedule and in extreme circumstances requires a supreme recovery effort from a major and widespread disruption to service.

The continued acceptance of this principle – that crew related issues remain largely in this category of ‘uncontrollable’ – is for an airline to sustain a level of crewing that is most probably substantially in excess of what should be required for the operation. 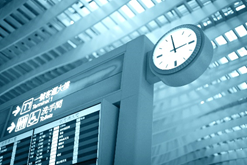 Within the airline industry there is an ingrained spirit that demands heroic behaviour on the part of operations staff to ‘keep the metal moving at all costs’, no matter what unscheduled events happen and no matter at what cost. While wanting to keep the show on the road and / or get it back on the road is a highly commendable sentiment it very often can run counter to good business sense.

However, if hard facts are not made available to those in the ’hot seat’ in terms of likely knock-on consequences of actions about to be taken in the moment and the cost of the solutions being opted for, it is difficult to say ‘stop what you are doing’.

When you throw into this mix the incredibly high degree of protection afforded flight crew members, especially, through the very complex work rules negotiated between their unions and the airline, then it is easy to understand why most crew related schedule disruption is universally accepted as ‘uncontrollable’. 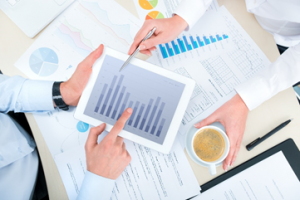 However, it is this perception in airline senior management that crew events are largely uncontrollable that is costing airlines massive amounts of waste in operating costs.

Rainmaker’s analytics solutions provides ‘a window’ into the workings of an airline’s scheduled operations to identify the key areas of wasted cost in terms of:

The first consequence of analysing the type of data outlined above is the design of corrective and preventative actions especially in the planning phase of crew scheduling / vacation allocation to avoid planning for the same mistakes that can now be anticipated based on the exposure to what has consistently occurred before.

Management can track behaviour of individual crew members who have an established pattern of earning well above the mean but their productivity is consistently below the mean. The reality of how this behaviour is facilitated is that certain crew members in every airline become very expert at how the work rules can be ‘leveraged’ in their own personal favour. It is to all intents a deliberate, but ‘legal’, selection by the crew member against the airline. This forewarning puts management in a more controlled mode to act quicker to reduce the opportunities that allow such selection against the airline.

A spin-off of having this empirical evidence of what the behaviour of ‘the significant minority’ is costing the airline is that it places management in a much stronger position to renegotiate with unions next time around. Of course this is a highly sensitive subject but the reality is that up to now the granular data has not been readily visible. It is in the best interests of the majority of crew members and the airline that fairness in the effort / reward exchange is applied equitably. This is achieved by having accurate data shared on the table.

The very real potential benefit to be achieved from this investment in Crew Analytics is the discovery of the pragmatically appropriate level of crewing required to run the operation, which based on the exposure of what is currently going on has to be a substantially lower number than it is today.

This fundamental business shift by way of the recalibration of crewing levels will be attained on the basis of:

So to return to the concept that an airline is in actuality a factory manufacturing and selling Block Flight Hours, we believe the metrics that need to appear on the ‘C’ level management dashboard are as follows: 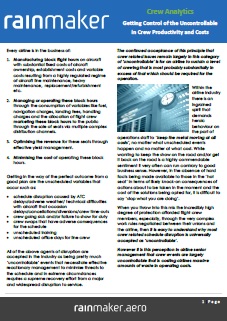